The focus of the Potato Program is to provide quality seed potatoes to commercial growers that are varietally pure and relatively free from disease causing organisms. Seed provided by the PMC is used as the initial stock for a multiple-year certified seed production scheme.

About the Potato Program

Potatoes are among the most valuable crops grown on Alaskan farms, creating a net value over 3 million dollars annually. The potato can be afflicted by a wide range of pests and diseases, many of which are carried in or on the tubers used for seed. Diseases can cause significant losses, reducing both yields and quality. Seed tubers free from disease are therefore required to assure successful yields and quality.

Seed potatoes, produced under strict protocols at the PMC, are sold annually to growers, and are increased over the next several years. This system enables the grower to maintain yields by annually replacing older diseased seed with clean, high quality, disease-free seed.

The importation of seed from outside the state has the potential to introduce pests not known to occur in Alaska. The introduction of these diseases or pests can cause major problems and the importation of seed is therefore discouraged. Growers wishing to try new varieties are encouraged to obtain clean seed potato stock from the PMC. While farmers remain the focus, seed stocks have been provided to many different entities, including the Tanana Chiefs, Kenatzi, Ahtna Corp., Juneau Community Garden, Kenai Master Gardeners, UAF Researchers and the UAF Cooperative Extension Service. 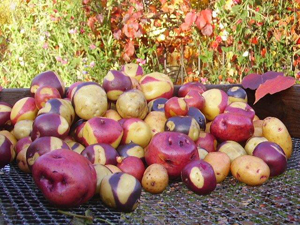 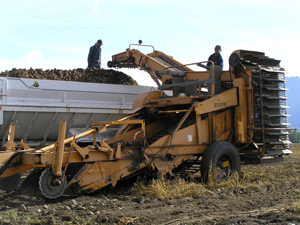 Potatoes have been grown in Alaska for centuries. The tubers are an excellent source of nutrition, high in vitamin and mineral content. Potatoes can be produced under a wide variety of environmental conditions, and they can be stored for later use. With the addition of milk, the potato is a complete protein.

The potato is vegetatively propagated, and consequently has unique production problems. Replanting tubers from year to year tends to build up populations of disease causing organisms. This was the scenario in the late 1970's when Alaska potato farmers were plowing under rotting fields.

A group of growers got together and successfully lobbied the Alaska legislature to fund a seed potato program to be housed at the Plant Materials Center (PMC). The idea was to use a tissue culture based propagation method to provide pathogen-tested stock to Alaska's growers as a source of clean seed. The program began at the PMC in 1984. The certification handbook was rewritten at this time to reflect the new propagation system, which limits the number of years seed can be replanted and remain eligible for certification. Alaska allows eight years of eligibility. The limited generation seed potato propagation system has been adopted by all certification agencies in the U.S. and Canada.

The PMC produced its first seed potatoes in 1984. After a few years of trial and error, a system was developed using 2 gallon pots, a peat based soil-less mix and fertilizer injected drip irrigation. Various modifications and refinements have resulted in an average of 1/2 lb tubers, from 1/4 inch to baker size, per pot.

As the tissue culture propagation system matured, new varieties were added. Growers are always looking for better varieties. To minimize disease introduced from imported seed, the PMC acquired pathogen-tested stocks and propagated them for experimental use. Home gardeners can be a source of disease introduction and many varieties were acquired in an effort to replace these imports. The PMC has screened over 600 varieties for adaptation to high latitudes. Several of these introductions have replaced older varieities. Russet Norkota, Shepody, CalWhite, German Butterball, Cherry Red and French Fingerling are now commercially grown in Alaska.